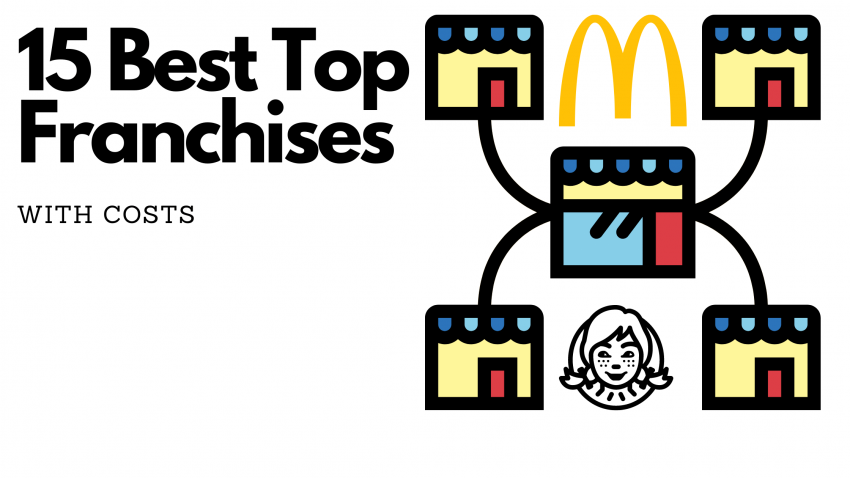 The problem with that, and it’s nothing against the inexpensive companies, but they are not, unfortunately, popular and are not the best franchise to own. Usually, with popularity comes income; customers like things they know. It’s due to familiarity, which brings a sense of comfort, which is connected to a-familial-kind-of-connection.

Also, people like routine, which is doing the same thing, which is transferred over to the shopping mentality, so people enjoy the same company. It is why brands are a thing. We will not even talk about the fact that people go into a restaurant and buy the same meal almost every time. Like I said, familiarity, comfort, and routine. It’s a Franchise thing. It’s a human thing. It’s what the best franchise to own is made up of.

As humans, we obviously love to save money, but we also love to make money. In this case, you are a human who is probably looking for the best franchise to own, here are the top 15 best franchises to own in 2020: “affordability” and popularity edition.

The Best Franchises to Own in 2020: Affordability and Popularity Edition

Cruise Planners costs: $2,095- $22,867 which is really affordable. This franchise is relatively known; therefore, it wins in the affordability category and popularity and familiarity. Not to mention that it’s home-based, which is a win-win for everyone.

Landing on number 3, and steering in a different direction then travel agencies, is Kumon. Kumon is a tutor franchise based in Japan, although it is known in North America. It is popular and trustworthy for parents to send their children to advance in their education and receive the help they need.

The cost to start up this franchise is $73,400-$154,800. This is not as affordable as the agencies above; however, Kumon is well known in the tutoring industry.

* Fair warning the costs will only increase from here for the other franchises.

Cutting its way through to number four is Great Clips. A Hair Salon Franchise is well known, especially in the United States.

Its cost is as dazzling as a new haircut, which is $136,900-$259,400. A little on the expensive side but still fairly affordable, considering it is a familiar brand that people know about and, therefore, actually invest in.

Ice cream is a critical lifestyle choice. Seriously, people love good ice cream. Even better, they love to go to Ice Cream places that are known because usually, those places are reliable to give ice cream that matches their taste buds.

Normally, we as humans, in this century, are filled with an unexplainable joy when we receive a package in the mail. Even though we ordered it and we know what’s inside the package, it’s like receiving a gift from a friend when we receive the package. That is what UPS is like, a friend. People rely on, know, and trust UPS to bring them their products safely and efficiently.

Who doesn’t like a good smoothie, whether you are trying to be healthier or crave a smoothie?  The majority. And as the majority rules, Smoothie King is number 7 and is for $263,600-$844,500.

Known as the girl in red, no red riding hood but just as adventurous to our taste buds, Wendy’s is Number 8 in rank out of the other fast food Franchises. Although some may argue that Wendy’s is not the most popular out of other fast-food franchises, it is still well known, and it is, believe it or not, the most affordable out of the other chains.

What makes 7 Eleven different from other convenient stores? Innovation and familiarity. 7 Eleven is a convenience store usually found alongside a gas station: a 2 in 1, a genius because of double the profits, which is why 7 eleven comes in at number 9 with a price tag of $47,100-$1.2 million.

Speaking of convenience stores, usually, they sell sweets, including donuts, and donuts are a delicacy, some will argue, at least. A donut lover needs a reliable, well known, and frankly a company that makes good donuts. Dunkin Donuts is not only reliable, well known, but also tastes good. Therefore, many people are loyal to Dunkin Donuts, and as such, is a good investment with the cost of it being $395,500-$1.6 million.

Which is why Dunkin comes in at number 10.

Although we already have an ice cream franchise Dairy Queen in this ranking, it is versatile and has other options other than ice cream, and one would argue that Dairy Queen should not have come in at number 11. However, Dairy Queen, yes, is popular and well know, which is a good thing but, it as far as “affordability” is at the cost of $1.1 million-$1.8 million.

Pizza, like anything else, has to have a good crust and what makes it even better is cheese in the crust. Yum. Pizza Hut being number 12, is well known for its good pizza quality. It’s also familiar, and people are attracted to familiarity. Even though it costs between $357,000-$2.2 million, it is an investment that is worth it, especially if you are looking to buy a franchise in the food industry.

Coming in at a controversial ranking of number 13, which is known as bad luck here in Canada, is McDonald’s. According to Franchise Direct, McDonald’s is actually number 1 on the Global 100 franchises of 2020 and within its’ right because of its McDonalds. Also, McDonald’s has training that is well known to be at a high level. They even have a university they call Hamburger University, which takes about 2 years to complete. They have everything at your fingertips, and generally, McDonald’s rules the fast-food industry. So, as far as popularity goes, Mcdonald’s is number 1. However, McDonald’s cost is number 13 in regards to affordability, which is at a price tag of $1.3 million-$2.2 million.

At number 14 is KFC, which is also a very well-known fast-food chain. People know it, and people buy it from it. As for familiarity, it’s a number 2, but for affordability, KFC is at number 14 as it costs: $1.4 million-$2.7 million.

Lastly, at number 15 but also very popular, is Taco Bell. Taco Bell would also be number 3 in familiarity and reliability, but it comes in as the highest price tag of $525,500-$2.96 million as far as cost.

According to affordability and popularity, these top 15 best franchises to own in 2020, which ties hand in hand with familiarity and sales, is probably a little controversial considering the popular ones are at the bottom of the ranking. However, the main focus besides popularity was affordability. Therefore, many of these popular franchises cost a few extra bucks, to say the least, but they are a good investment.