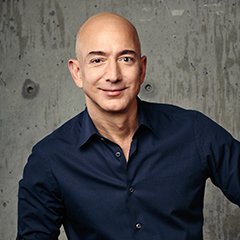 According to Britannica, Jeff Bezos was born on January 12th, 1964 in Albuquerque, New Mexico.  He is one of the most well-known American entrepreneurs and if you don’t already know he is the CEO of Amazon.com. Amazon has become one of the most popular online shopping sites in the world. Amazon started as an online wholesaler for books but now you can purchase just about anything on Amazon. While he was in high school he created the Dream Institute, which was an establishment that raised awareness for innovative thinking with young students. He then attended Princeton University with a degree in electrical engineering and computer science. In terms of Amazon, its yearly net sales have continued to rapidly increase over the years. In July of 2020, as stated by a CNN article he set “a new record for the world’s richest person.” Inevitably, Amazon has majorly benefited during this COVID-19 pandemic as more people are shopping online.

Jeff Bezos Net Worth is $204.6 billion according to Wikipedia.

“If you do build a great experience, customers tell each other about that. Word of mouth is very powerful.” – Jeff Bezos.

As specified by Biography, Oprah Winfrey was “born in the rural town of Kosciusko, Mississippi, Winfrey moved to Baltimore in 1976, where she hosted People Are Talking. Afterward, she was recruited by a Chicago TV station to host her own morning show.” Oprah is known as a self-made billionaire and has risen from many downfalls such as poverty, sexual abuse, an unwanted pregnancy, and the death of a child. “The Oprah Winfrey Show” focused on specific topics such as women empowerment, and human rights. On the authority of Forbes, “In March 2020, she returned to the small screen on Apple TV+ for an interview show about Covid-19 as part of her multiyear pact with the streamer.”

Oprah Winfrey is motivational, inspirational, talented, and has a magnetic personality. She has been ranked the greatest black philanthropist in American history by influencing people all over the world and from different cultures. She is multifaceted as she didn’t just have her own TV show that won many awards but she is also a film producer, entrepreneur, actress, and as mentioned philanthropist.

“You become what you believe. You are where you are today in your life based on everything you have believed.” – Oprah Winfrey

As reported by Investopedia, “Elon Musk is a South African-born American entrepreneur and businessman who founded X.com in 1999 (which later became PayPal), SpaceX in 2002 and Tesla Motors in 2003.” Elon was born and raised in South Africa, but Musk did spend some time in Canada before venturing and moving to the U.S. He attended the University of Pennsylvania with a major in physics and he then branched out as a serial tech entrepreneur. Back in 2016 as outlined by Statista, Elon Musk was “the most admired tech leaders among startup founders in the U.S.”

Despite living through a hard childhood he is known to have a persistent work ethic and work approximately 100 hours a week while having a unique and innovative single-minded vision. Elon Musk has had the vision to change the world and help humankind. It can be said that he maintains a positive global influence on society. Conforming to Global Influence, “His goals include reducing global warming through sustainable energy production and consumption, and lessening the risk of human extinction by establishing a human colony on Mars.”

“When something is important enough, you do it even if the odds are not in your favor.”  -Elon Musk

Martha Stewart was born on August 3 1941 in Jersey City, New Jersey. She attended Barnard College in 1963 where she earned a degree in architectural history. Looking at Reference for Business, “Martha Stewart transformed a home-based catering business into a multibillion-dollar media franchise centered upon her image as a consummate hostess, food expert, and do-it-yourself decorator. A trusted tastemaker and icon of American domesticity, Stewart skillfully cultivated one of the most recognizable and powerful brands through her award-winning television program, best-selling magazine, and more than 20books on cooking, gardening, and home decor.” Despite being incarcerated due to an insider trading scandal her net worth more than tripled during that time.

Martha Stewart is an entrepreneur, best selling author, and TV star who has gotten the world excited about food especially in America. She is the author of several popular books about food and also entertainment. Her ability to create excitement around food and wine is compelling as many people are food and wine enthusiasts. Inevitably she influenced how Americans eat. As reported by Statista, back in 2017, Martha Stewart had the fifth-highest followers on Instagram for the biggest food accounts on Instagram.

Mark Zuckerberg was born on May 14 1984 in White Plains, New York. Looking at Thoughtco it states, Mark Zuckerberg “is a former Harvard computer science student who along with a few friends launched Facebook, the world’s most popular social network, in February 2004. Zuckerberg also has the distinction of being the world’s youngest billionaire, which he achieved in 2008 at the age of 24.”

Zuckerberg has inevitably altered the way that content and news is being delivered. Zuckerberg’s social media platform (Facebook) and his capability to transform a transmission outlet utilized by more than two billion people is impressive. He has been considered one of society’s most influential people. People use Facebook and Facebook Messenger to talk to their friends and loved ones that live across the world. Essentially, Facebook has created a platform where people can stay in communication.

“The biggest risk is not taking any risk. In a world that is changing really quickly, the only strategy that is guaranteed to fail is not taking risks.”  – Mark Zuckerberg

Arianna Huffington is a Greek/American author, columnist, and businesswoman. She was born on July 15, 1950, in Athens and is the co-founder of The Huffington Post, the founder, and CEO of Thrive Global. According to IMDb, she has quite an impressive resume. She was a candidate for Governor of California in 2003, she was a graduate of Cambridge University, and she released several books one of them being “The Fourth Instinct: The Call of the Soul” in 1994.

Arianna Huffington is influential through her work. She is a politician, commentator, actress, author, journalist, editor, writer, and screenwriter. As reported by Chicago Tribute, “Huffington herself had made her way onto every list of influential media figures – a celebrity in her own right and, for many women, a role model, one of a handful at the top of the media’s totem pole.”

“Fearlessness is not the absence of fear. It’s the mastery of fear.” – Arianna Huffington.

In line with GatesNotes, “Bill Gates is a technologist, business leader, and philanthropist. He grew up in Seattle, Washington, and was born on October 28, 1955, with an amazing and supportive family who encouraged his interest in computers at an early age. He dropped out of college to start Microsoft with his childhood friend Paul Allen.” He is married to Melinda French Gates and they have three children together and they also both created the Bill and Melinda Gates Foundation, which is a way they have contributed their profits back to society.

Bill Gates is a very powerful businessman who has in fact changed the world. As stated by Better World International, “In June 2010, Bill Gates and his long time philanthropy sidekicks Warren Buffet formally launched “Giving Pledge”, a campaign seeking to encourage the billionaires of the world to give away at least 50 percent of their wealth to philanthropy or charitable causes either during their lifetime or in their will.”

“Surround yourself with people who challenge you, teach you, and push you to be your best self.” – Bill Gates.

While Sofia Vergara may not be considered a typical entrepreneur that people would think of, she is a confident and powerful businesswoman that has worked her way to the top. Many know her as the talented actress from the TV show Modern Family. She was born in Columbia and has come a long way in her career. According to Statista, from June 2017 to June 2018 she was the highest-earning Hollywood actress.

In the opinion of SuccessStory, “Sofia Vergara is one of the top-earning actresses on US television and is ranked as the 32nd most powerful woman by Forbes.” Also, according to Diversity Woman, Sofia Vergara is a star who means business. “Vergara capitalized on her fans’ enthusiasm for her sense of style with the debut of her own clothing line, in partnership with Kmart. She had a hand in designing all of the items, which reflect her love of vivid colors and sexy-comfy chic.”

She has proven to the world that while being a successful actress she also has the capability to be a savvy businesswoman. She has become a huge role model for women out there. Did you know that she co-founded Latin World Entertainment in 1994? Sofia also has supported several charities and foundations such as Alzheimer’s Association and American Foundation for Equal Rights.

“Confident people have a way of carrying themselves that makes others more attracted to them.” – Sofia Vergara

As stated by Business Insider, he is the “CEO of Bloomberg LP and founder of Bloomberg Philanthropies. He is expected to run for president of the United States as a Democratic candidate.” He was born in Boston, Massachusetts, and was also a former Wall Street executive. He was also the Mayor of New York from 2002-2013. He is also an actor and has written many books such as “Climate of Hope” back in 2017. Bloomberg was in the presidential campaign but now it is between Trump and Biden.

Since he has certain positions on guns his stance on gun control positions him in positive lighting. He abides by worldwide background checks, the means to limit the trafficking of guns, and the elimination of assault weapons. In addition, he wanted to support a public option on healthcare for Americans and he supports same-sex marriage and believes transgender individuals should be allowed to participate in the military. His inclusive platform makes him an influential figure in the political and business world.

“You can’t define what middle class is, what is wealthy, what is poor.” – Michael Bloomberg.

You may be asking how is Beyonce an entrepreneur? Well, following information by Matoyana they state, “In April 2016 she launched Ivy Park, a leisure clothing brand joint venture between Parkwood and Topshop, as well as investing in WTRMLN WTR, a water start-up, founded by women. As many entrepreneurs do, Beyoncé has branched out into ventures by networking with people who inspire her.”

Beyonce has not only influenced the world through her music but she also speaks for a generation as a feminist icon through her music and work through her charity. As reported by BBC Culture, “In 2014 Forbes declared Beyoncé to be the world’s most powerful celebrity, and she has leveraged her global brand in support of gender equality through her influential charity, the #BeyGood Project. Her hit single Flawless samples from a TEDx Talk called “We Should All Be Feminists” by Nigerian author Chimamanda Ngozi Adichie.”

“We have to teach our girls that they can reach as high as humanly possible” – Beyonce.